A shedload of sheds!

With the laser cutting complete, sheds for the architectural model are taking shape. As I stood in the workshop exhausted from building a 'shedload of sheds', I decided to remind myself about why we chose sheds in the first place. Here are some of my earlier thoughts....

Throughout history the shed has been integral to artists of all kinds. William S. Harley and Arthur Davidson worked on their first motorcycle in a backyard shed while technology giant, Hewlett-Packard, first set up in a home garage. So too Walt Disney’s first studio was in an uncle’s garage. From music composers to authors, such as Charles Dickens, Roald Dahl and William Blake, the shed has been integral to their creative making process (Johnson, 2010).

In recent times, the shed has undergone another social transformation. As Jane Hulse (see Johnson, 2010, p.11) from the Los Angeles Times says, ‘Once shabby, now showy, the shed has become a haven for the home office, art studio, sewing niche or guy getaway.’ Alex Johnson (2010, p. 11) in his book ‘Shedworking: The alternative workplace revolution’ further explains: ‘Over the last decade we have seen an evolution of the office workplace. A small shed which once only housed lawnmowers and pots can now be insulated from the cold, fitted with its own electrics, and can link you to anywhere in the world.’

Unfortunately, the shed has also taken on a more sinister role in recent times being used by ‘rogue landlords’ who illegally rent sheds to ‘the most vulnerable and ignored in society – the migrant workers, the young people close to homelessness, and destitute families…’(Foster, 2014). Known as ‘beds in sheds’, it is an increasing national concern brought in part by the increased cost and shortage of housing. In Oxford, where national house prices are 11 times higher than local salaries (Collinson, 2014), it is estimated that several hundred such ‘homes’ exist.

It is indeed an interesting time for the garden shed. We hope that Shed Space will contribute to the creative zeigeist surrounding sheds. By collaborating with Crisis, the national charity for single homeless people, we are also fortunate to be working with a number of their members in order to cultivate the shed's living roof. Now I remember why we chose sheds!!! 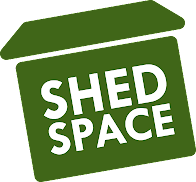